This walk-through takes a look at perspective drawing, Victorian/Tudor architecture and line work… 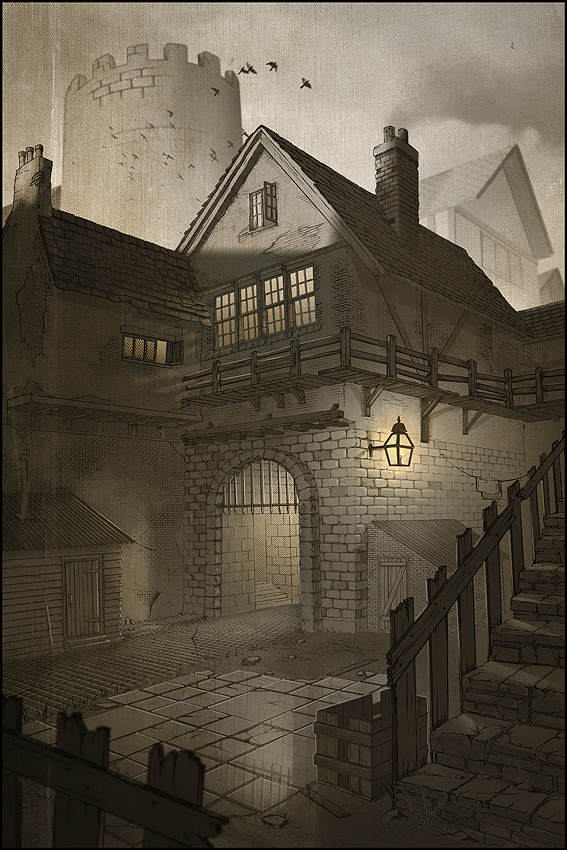 I decided that I needed work on my perspective drawing skills and deviate away from 3d in order to produce a fully hand-drawn piece. This isn’t a painting study though, so I set out to put in a solid line-drawing and maybe some basic light and shade over the top and not produce a fully painted image.

I wanted to focus on quality of line as well as some tight details.

This, however, was not immediately apparent when I first set out, as I had actually began making this in 3d… 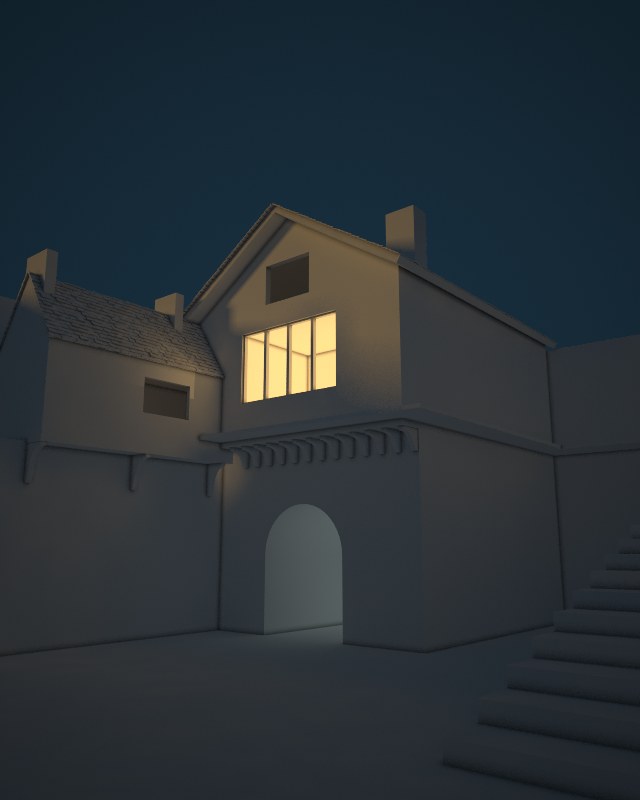 It was at this point that I just felt that 3d was too ‘literal’. What I mean is that, with 3d, you have to keep shoving lights around and changing render settings to get the mood you want and I just wanted to paint it in without having to click ‘render’ every few minutes. So I figured it was time to roll up my sleeves and start drawing.

Before I go into that, let’s talk about inspiration. 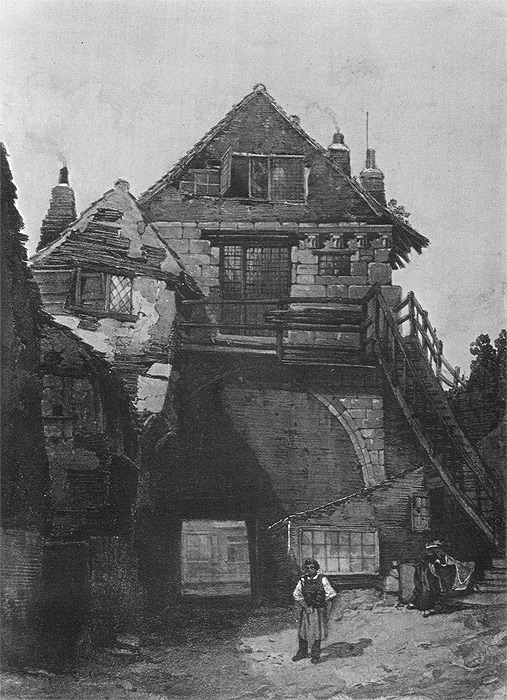 Trinity Priory Gateway – Francis Bedford, c. 1840 – York Through the Eyes of the Artist

This was the painting which I used to base my sketch on. I love how all the architecture is just leaning or resting on itself. Looks incredibly organic.

I’m not 100% sure of the dates or period of this architecture but I would say that it’s a fusion of Tudor styles with Victorian masonry or brick work. As you can tell from the rest of my portfolio, I do love these two styles.

It’s well worth studying up-close, the detailing of such buildings. I live in a Tudor/Victorian city so that’s not hard for me!

I start with a few thumbnail sketches in my sketch pad. These are tiny, just so I can whiz about the page and scribble quickly. I started with the one on the left and realised that the perspective wasn’t dramatic enough, so then made a 3 point, looking-up version on the right.

From here I go to a larger thumbnail sketch: 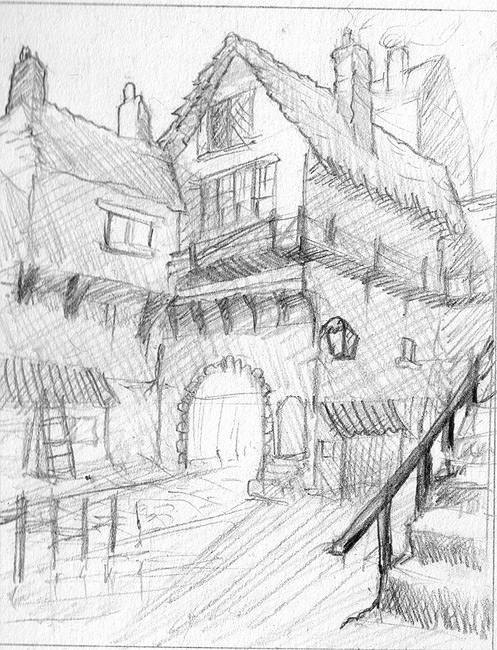 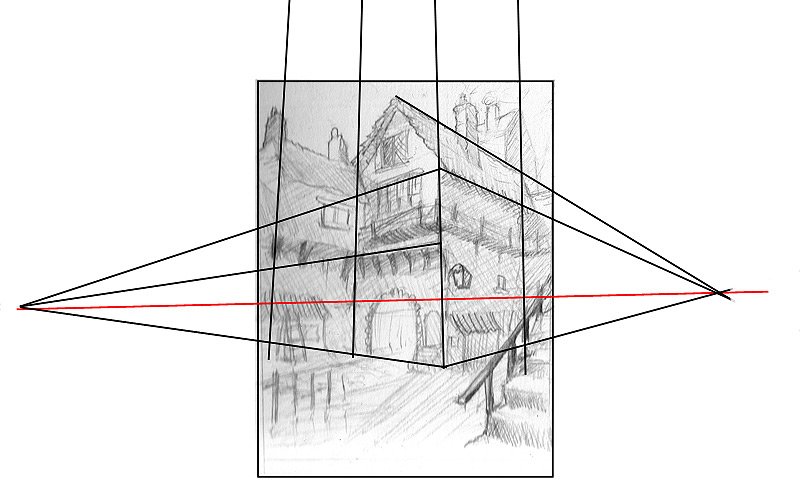 So the next stage was to bring the scan into Photoshop and create the above perspective lines based on the vanishing points. Obviously point 3 is way off the page so that takes a bit of eye-balling.

Once I have that guide I’ll start to block in. Here’s how rough and basic it can look… 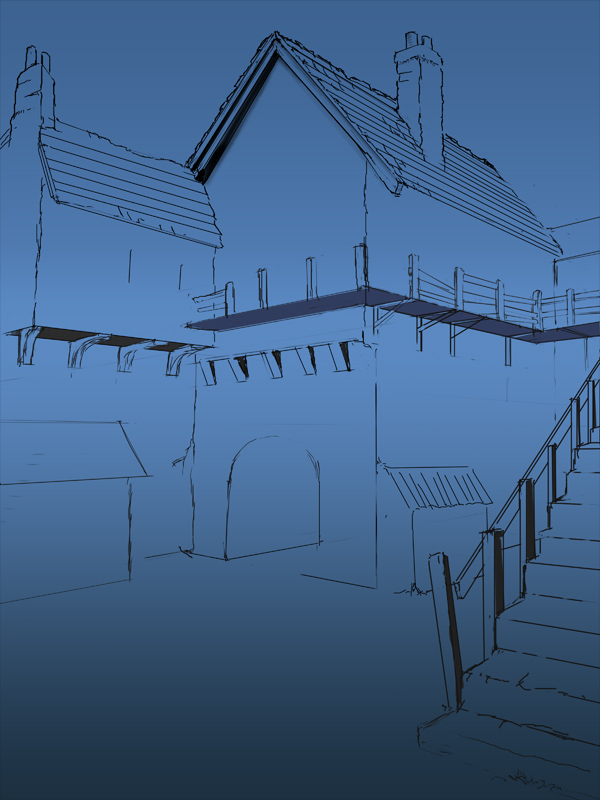 Quite a far cry from the finished product. That’s ok, we’re just getting in the basic composition and contents. Pretty much every single line here is replaced in the refining process.

I then, sort of not quite deliberately (lol) did a line test here: 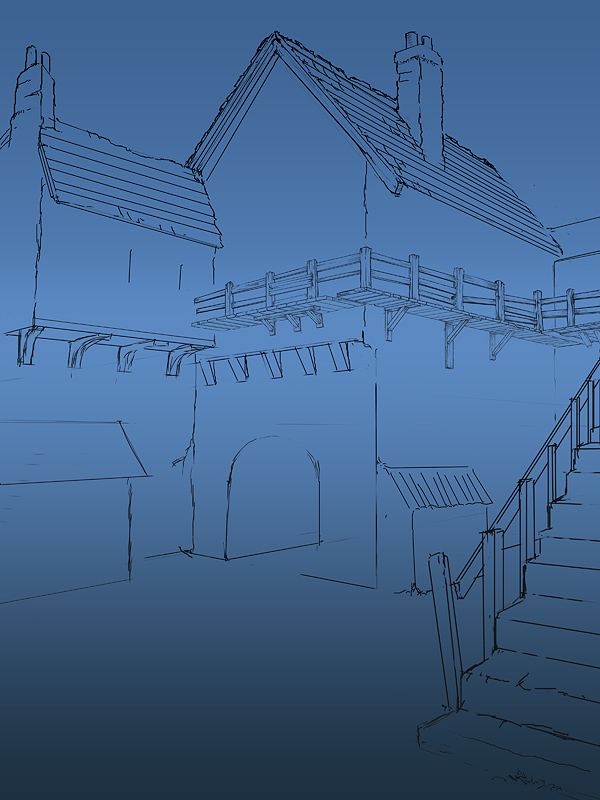 And it was here (see the wooden railings) that I realised the quality of line that I would be aiming for and this gave me some confidence that the finished piece would be pretty enough, at least in terms of line and detail. This is always a crucial stage for me as I suffer from ‘it looks crap and I suck’ syndrome at the beginning of every piece, so need to noodle out some high detail in one corner to then imagine what the rest of the piece will look like. If you suffer from the same syndrome I recommend doing that.

So, without going into every detail (because there isn’t much to say) I thought I’d compile a couple of animated gifs showing the process. Here’s the first one before I decided to change the composition:

Note that the Photoshop document I used was 3x the width of this and had the vanishing points marked out. Every line I made had to match up with those. Quite painstaking.

Here are the progress steps as I neared completion and started considering lighting and composition more: 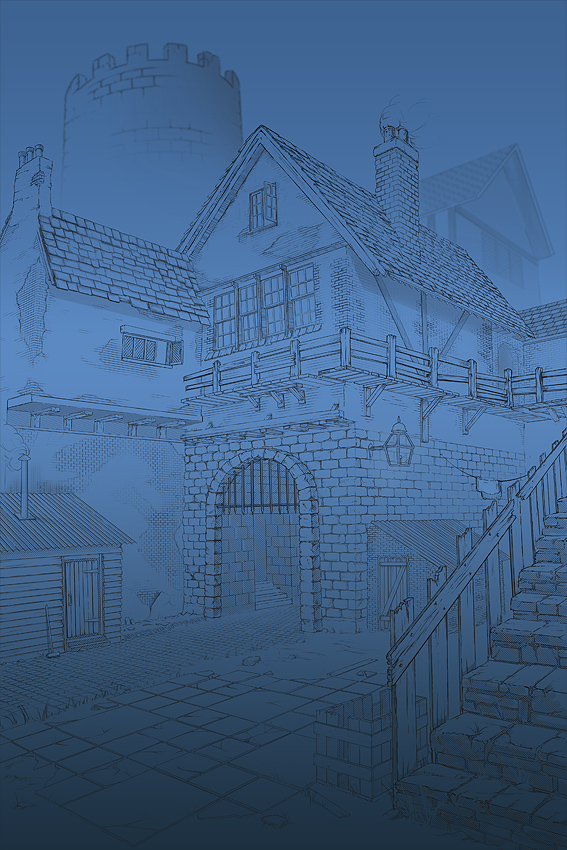 A few tips for tiling surfaces!

Oh the tiles were a pain. Both brick and slate. What I did was to draw a grid – all my lines going back to vanishing point 1, then the same going back to vanishing point 2. So it looked like a very basic brick tile – I think it’s called a half tile because each brick overlaps by half, y’know, standard brick pattern. I would then fade out the opacity of this and draw in each brick (or tile) by hand and make it look 3d and crooked, cracked etc.

Another tip is to make the tile guide fully 2d – as though looking straight-on. Draw your lines horizontal in a new layer, right on top of the drawing or even in a separate document for later use (as this can be re-used) then your vertical lines which indicate the individual half-tiling bricks (or slates, or cobbles) then just use the transform > distort to put it in place. This way you know everything is square and perfect, rather than having to guess every single line and factor in foreshortening. This isn’t great for fine tiles. I used this process for the cobbled floor and by the time I distorted it into place there was a lot of noise where the lines just bunched up too close.

Hope I explained myself well enough!

If you have any questions, feel free to email me.