Old gas stations, alone on dusty highways, make for some ethereal atmospheres. Here’s how I did it…

Ok, so first let’s look at the end results (there are a few). Make sure and click to see them in full 1200px resolution.

I tried making rough, greyscale thumbnails first but that didn’t work out too well because I needed to be quick with seeing geometry in different angles without having to constantly tweak a perspective grid and then re-draw it several times. So I went into trusty ol’ 3d.

First attempt. I kept close to the ground, looking slightly up and wanted to get in some of the side of the gas station, so tilted the camera slightly to give us a slight three-quarter angle.

And here’s another tweak, this time adding telephone poles and pulling back a little. I wanted the shot to be as much about the road/context as the building so as to highlight how lonely it is.

Here’s the basic final render. I removed the directional light and replaced it with a dome light because I wanted to be able to control light/shade inside photoshop and make it as much about the painting as possible. This keeps it somewhat ‘alive’ as 3d can be too clean and tight.

I’m going to take you through the first shot I made which is the very first image in this post, the one that’s probably the spookiest. It was actually my initial goal to make something that would suit a modern day horror movie, something similar to House of 1000 Corpses by Rob Zombie. Here’s a still from that movie which gave me a few ideas… 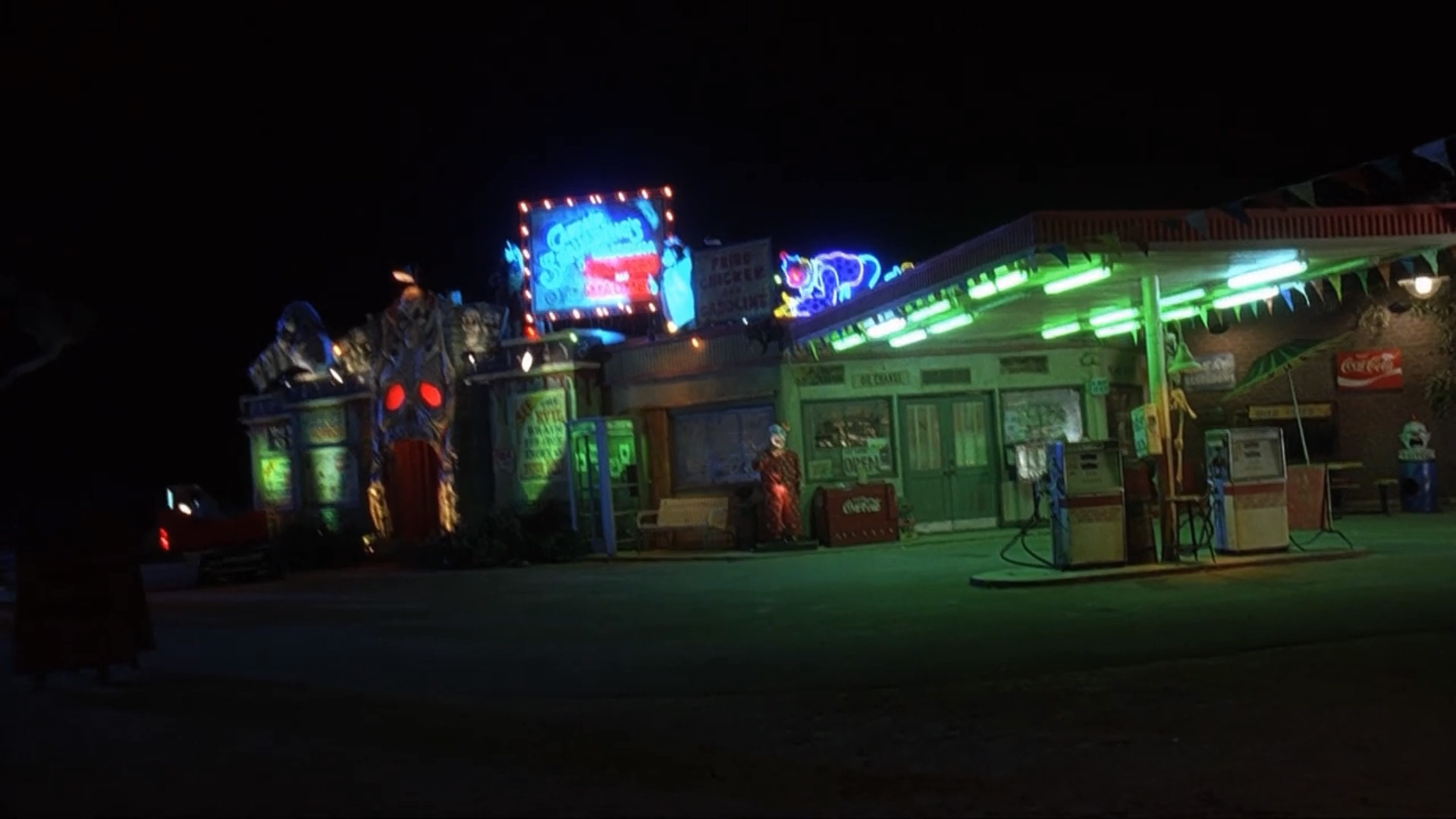 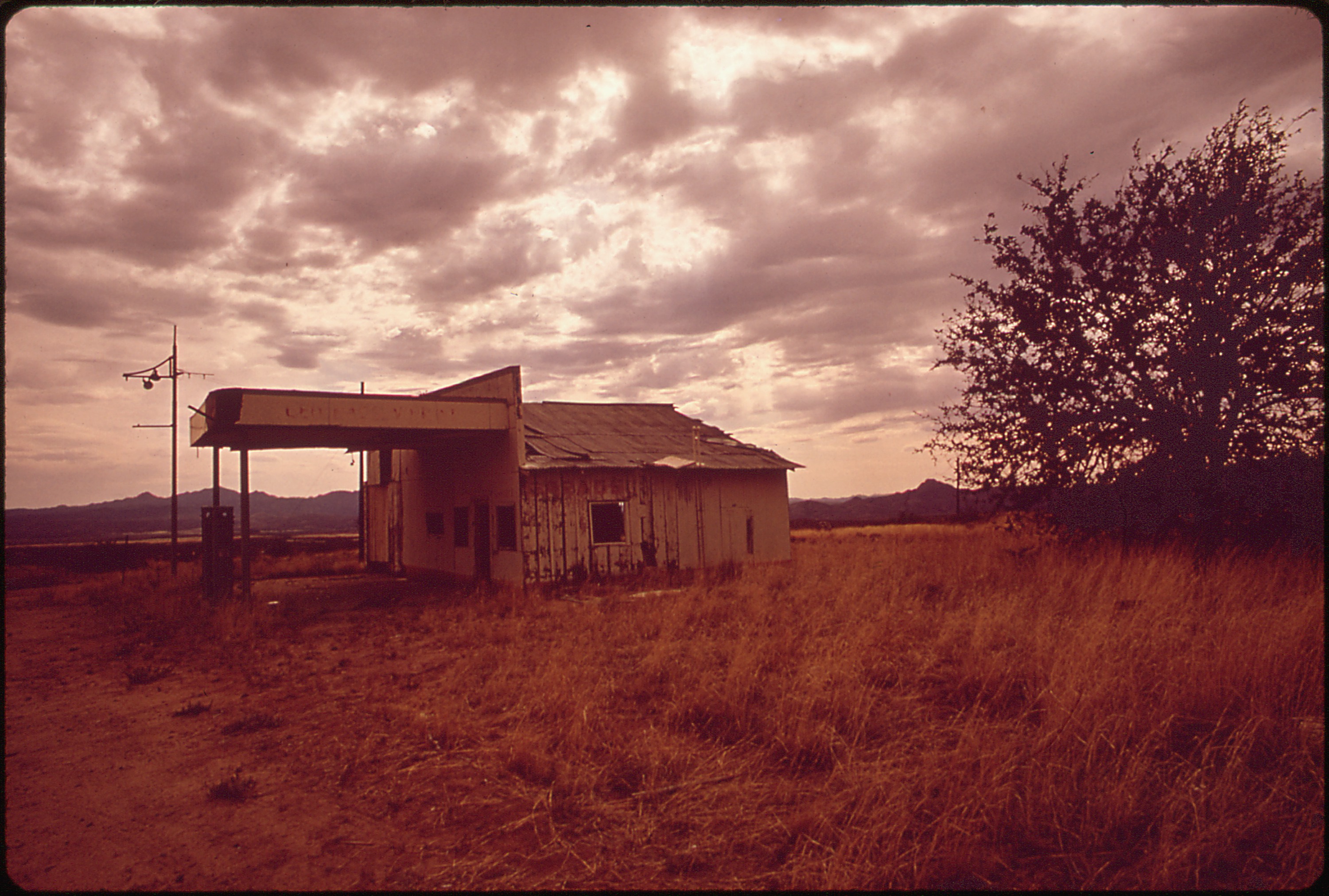 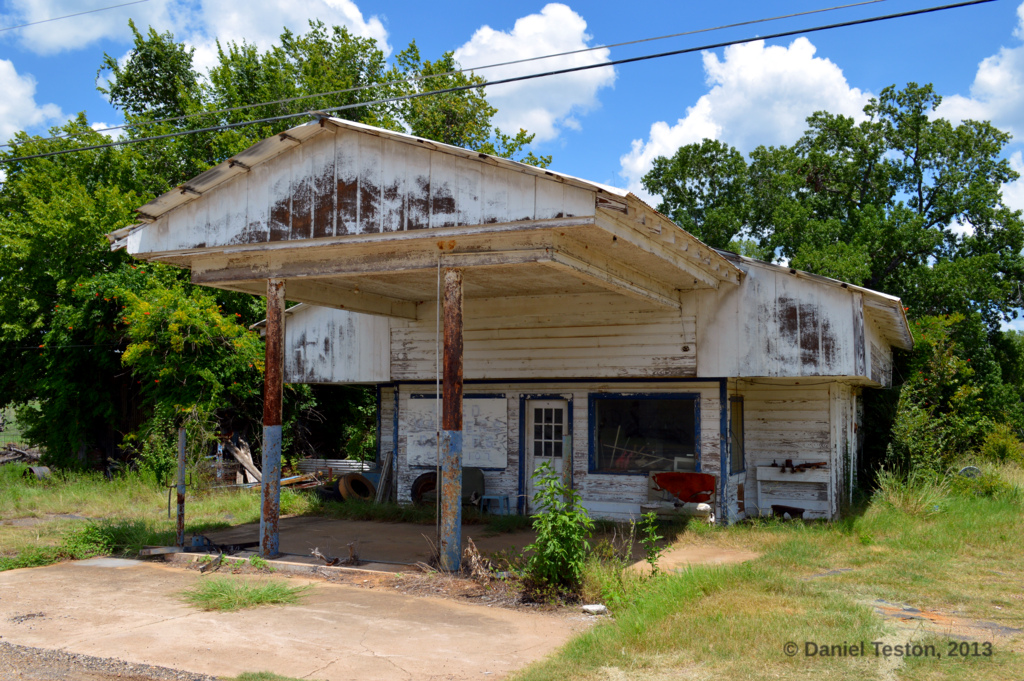 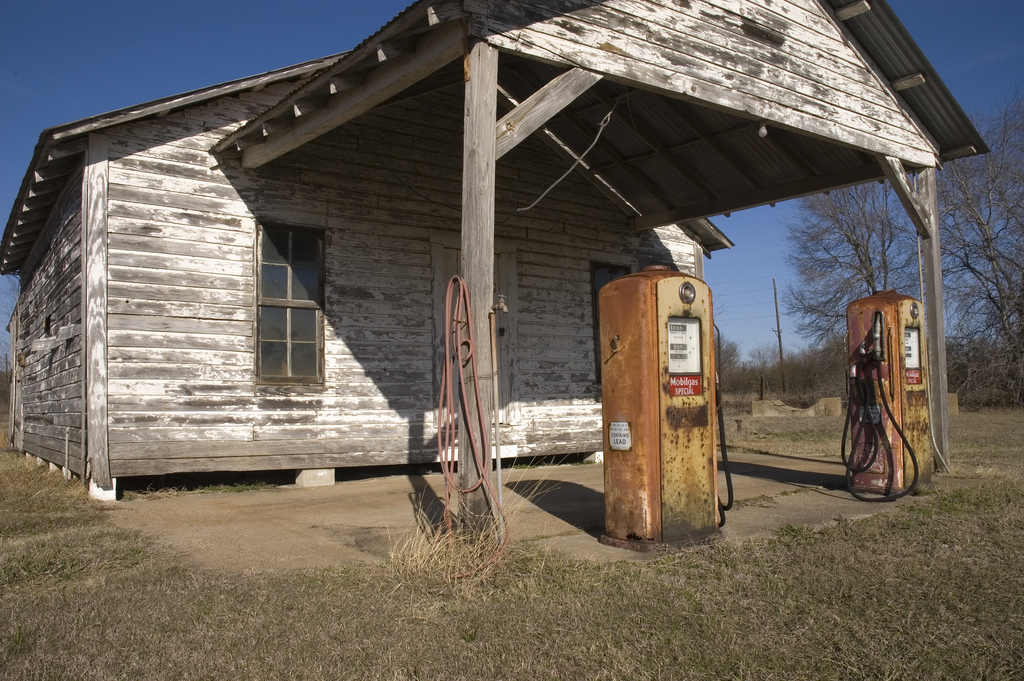 Ok, so on to the post-production.

This is the shot with some basic sky colour thrown in, some fog/atmosphere and some foreground foliage. I used some grassy brushes to get that done and also added a sort of path, leading the viewer’s eye straight to the gas station.

I added a moon around the top/middle left so as to create a 3rd point of interest which would take us from left to right (via the path), hitting the service station (point 2) and then off to the left again to hit the moon. This should carry our view through the painting, keeping it balanced. I also noticed that those telephone poles were subtly drawing us out the frame to the left, so I added a couple of dark trees to act as visual barriers.

Here I started to think about local lighting, what styles of lights and their colours as well as signage. Again, drawing inspiration from the reference above with the green strip-lights.

There’s a lot of subtle colour-correction going on to separate the forms – we don’t want the main gas-station building to just blend into the garage, so I created a layer between them containing some atmosphere, so you’ll notice it’s lighter there.

I also added a few little doors/windows here and there. Overall it was tricky to think about global illumination because all we have is a bit of moonlight and we have to sort of ‘fake it’ and hope to sell the viewer on the idea that the moonlight is giving us all our ambient light.

You’ll also notice another subtlety – the edging of the buildings has been aged/made irregular to take off the 3d ‘crispness’ and make it look more realistic.

Here’s the final piece. My main issue with this was readability. An exterior shot, at night, with no added external lights (such as street lamps, our only lighting is local) there is a battle going on between keeping it dark but making it readable. I did add some lightening atmosphere around the buildings to enhance their silhouette. If you study enough movie stills you’ll see that lit fog is often used for this purpose.

Green lighting along with the red accent on the tall sign were used in conjunction with with general blue hue of the sky to create a colour-harmony. At first I used a blue light for the main windows but instead found green to be more eerie. The blue felt too sci-fi.

Now, regarding readability, I created another shot because I really wanted to know what the scene would look like if it really were that dark. So here’s what I came up with…

This is interesting because it’s barely readable but pretty real and pretty spooky.

And so I applied the same techniques to the other paintings. There was a rather large number of layers for each Photoshop file. Around 70 I think. Tons of masks and clipping masks that I could paint into.

To get hard sunlight I might duplicate a dull layer, say the wood facade of one of the buildings, then adjust the levels/curves, put a mask over it, invert the mask and then paint back in what I need to show by painting onto the mask itself. It’s nice to do loose paintings on just 3 or even 1 layer, but this was not the time for that. So, process-wise, it was a little painful playing ‘find the layer’, but I fully intended to make each piece backwards compatible or reversible so that I could do a different version of that piece. The main amount of work was in getting the first shot created as well as getting the day shot set up as it was totally different to the various darker shots.

Here’s a comparison of 4 different shots together:

My main issue with the darker ones was readability. If you have any views on readability then I’d love to hear them, be it about this piece or other night/dark pieces. The question is, do we keep it dark and keep it real or add some more lights and risk losing some of the pure darkness or even fake the light to boost light were we plainly know there isn’t any – I’d call this ‘theatrical’ lighting.

Hope this gave you some food for thought. Questions and comments welcome!