I’ve been focusing on head studies lately and what better way to take a break from the anatomy books than to study Gandalf’s Noggin.

This digital painting tutorial is based on a speed painting study of Gandalf from the Two Towers episode of Lord of the Rings.

As it was a speed painting study it won’t be quite as in-depth as a longer painting but it may also serve the purpose of showing some speed painting techniques. Doing these quick studies is part of our every day education and is just as valuable as a longer study or a portfolio piece.

*Read below for the free hair brushes and tips on how to use them!

I played with the contrast in this image as the original, while trying to keep to the reference levels, was a little flat.

I will show all the steps below in a single image, then explain each step afterwards.

I don’t think people talk much about reference but it’s an important first step. I wanted to study a head/face and was wondering where I could find a decent source image. Problem being that about 90% of stock photography is poorly lit. I don’t mean so much ‘bad’ lighting as just vague lighting.

Some of the best lighting for people studies comes from movie stills. I happened to be watching Lord of the Rings on DVD and decided that the next time someone’s face was lit well, i’d do a study on it.

After a few minutes I found this image where Gandalf has recently been reunited with Aragorn, Gimli and Legolas in the forest. This is that bit where he’s talking with Aragorn under the moonlight – which made for some nice lighting – so I paused the DVD right at this moment and hit did a screen grab.

I liked the hard near-white light on the side of his face creating nice values/contrast. If your reference is poor, it’s hard to make the painting work – one to remember!

Always hate this part, it’s very awkward. So had my canvas set up with the reference right above of my canvas. Mainly because it’s a long, letterbox shape and it fits in a vertical stack on my monitor. A portrait study is usually side by side.

I make it so both the ref and the canvas line up perfectly and draw imaginary lines with my cursor down from the ref to make sure all his features line up.

I also use my method of eyeballing a colour, trying it out by painting onto the ref and seeing if my colour matches. Doing this really educates your eye. You’ll look at his hair and think it’s kinda off-white but it’s actually a medium blue. I call this ‘the relative light value’ and will note that the brightest part of my painting may actually be a medium brown or some such. This medium brown will be my ‘relative light value’. Then you have your relative blacks too, such as inside of mouths/nostrils etc.

It’s good to use a soft round brush for this as these areas curve and graduate, fade etc.

Throw down your basic highlights and basic shadows. Later it will all be moved about.

As this is a speed painting, we can do some fairly quick detail to capture the essence and that will be all we need. We’re trying to capture the reference rather than replicate it 100%.

I began with his left eye. This was done very quickly and was just a few brush strokes. As his eye is very minimal in the ref, it was easy to recreate. It had very obvious ‘landmark’ features like the hard highlights which make it easy to describe the form. If your ref has crap lighting then it’s up to you to somehow describe the form – not an easy task!

During the whole process his nose took a few bashings. I used liquify to push and pull it into place.

More work on his nose. At this point I started to change the workspace around so the ref and the canvas were side-by-side to see how things lined up that way. I was way off on the nose so squished it around again.

I also noticed, upon close observation, that his eyes were not in sync on the horizontal plane (when the canvas and ref were again stacked one above the other).

So this is a necessary step. Double check everything is lining up and in correct proportion. I will then tend to lasso around the offending part and copy it onto a new layer, then move it around until it’s fixed. I then may need to just airbrush erase the hard edge from the lasso to make it sit back in seemlessly.

I worked out some basic wrinkles and finished his right eye and cheekbone plus the shadow under his nose. Oh and his eyebrows, they were tricky too in terms of making sure they lined up with the ref.

NOTE ABOUT BRUSHES: So these are two brushes I picked up along the way, while I didn’t make the source images I tweaked them to work better than the originals in terms of brush set-up. 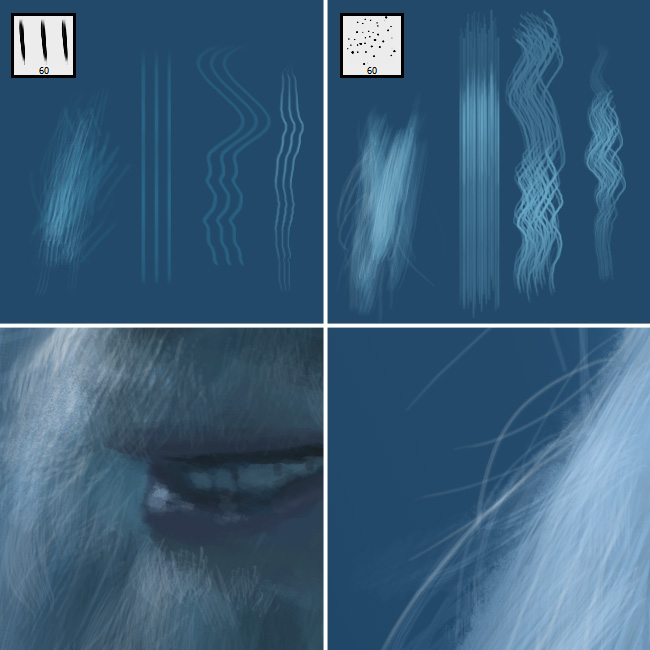 It’s really simple. The hair brushes provided have an opacity fade when used with your tablet. Use this fade to create the effect (see top examples in the above image) and for an even greater effect you can switch on ‘shape dynamics’ in the brush options. This I have set to size: pen pressure, so you don’t have to tweak anything, just check the box.

To get the fine strands I used the second brush, made it very small and turned on the shape dynamics. It makes for excellent whisps.

It terms of hair brushes, I can’t imagine needing any more than this. You may even get away with just using the second brush for long hair as the first seems mainly useful for shorter hair.

Finally I painted the mouth. I set the canvas side-by-side again with the ref. Pretty simple.

There are deffinitely a few mistakes in terms of accuracy of this painting but it was meant to be a speed study taking no longer than 2.5 hours – which is how long it took. So all-in-all I’m pleased with how it turned out. Plus I leared a few things about hair.

Right, that’s me done. Hope you got something out of this tutorial, if you did then please comment and let me know my time has been well spent 🙂