This digital painting tutorial is the first creature design tutorial here at SIW. With a good amount of prep and research you can exceed your own expectations! 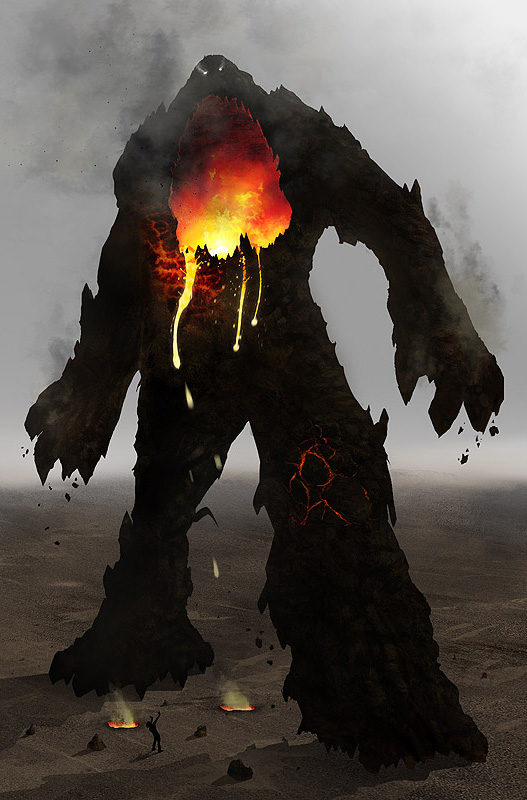 This part was crucial because I wanted to up my game in the realms of creature design. I hadn’t done a great deal of this kind of thing before, both in terms of theme and character design in general.

It’s worth mentioning at this point that the piece was a submission for a competition with very good prizes, so I really wanted it to be better than anything I’d done before. 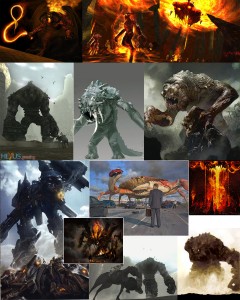 Click on this image to see a full-size version. Here I have thrown together just some of the images I researched as prep work for this project.

I researched the following areas: rock creatures, the Rancor Monster (also pictured here), the MMO game itself for which the competition is based around, giant monsters and some rock/lava images.

Getting the pose was the hardest part. If you look at the reference image you’ll notice Optimus Prime and this pose influenced my final pose.

The crab monster also played a part in influencing the perspective of the image. Perspective is an often overlooked aspect of character/creature design and can really sell an image.

From the very beginning the concept was vaguely in my head. I wanted something with a giant mouth full of molten lava. Either like a volcano or a cave. I wanted the eyes to be kind of dead and emotionless holes. I also wanted the creature to be rock in nature with a similar bumpy texture to the Rancor Monster with a hint of LOTR balrog. 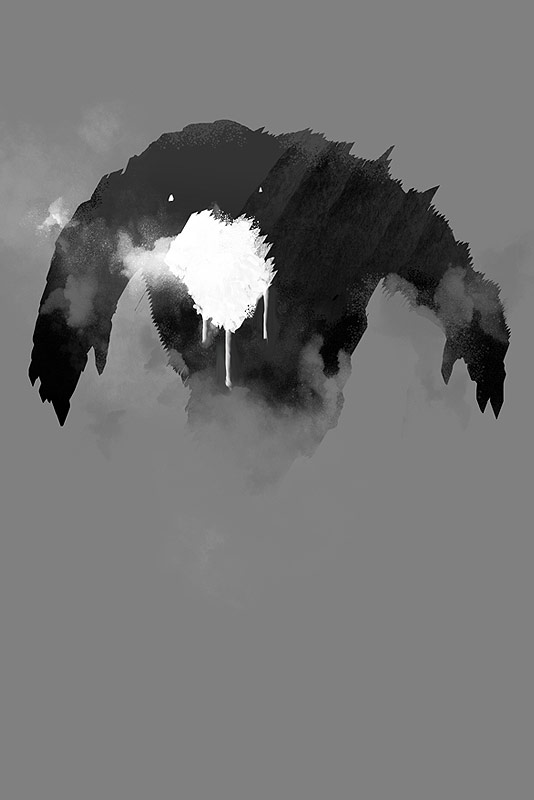 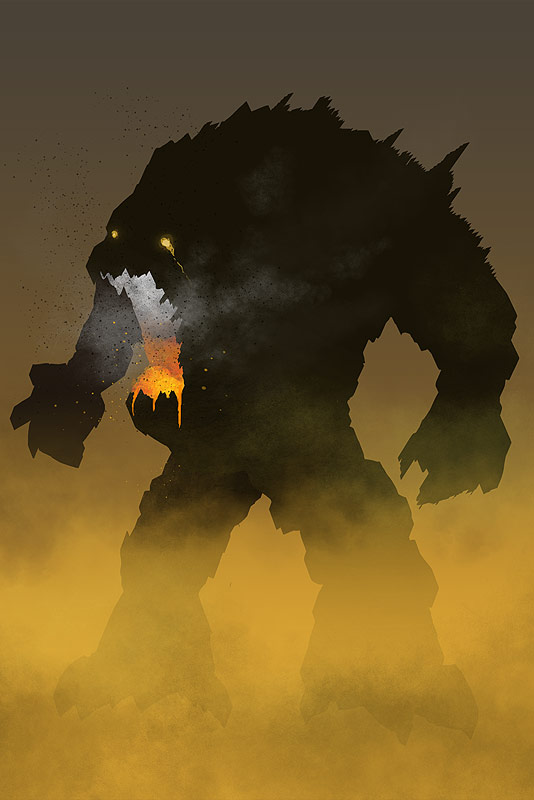 It’s worth noting that all the prep work didn’t happen at once. These sketches were done before I researched perspective. 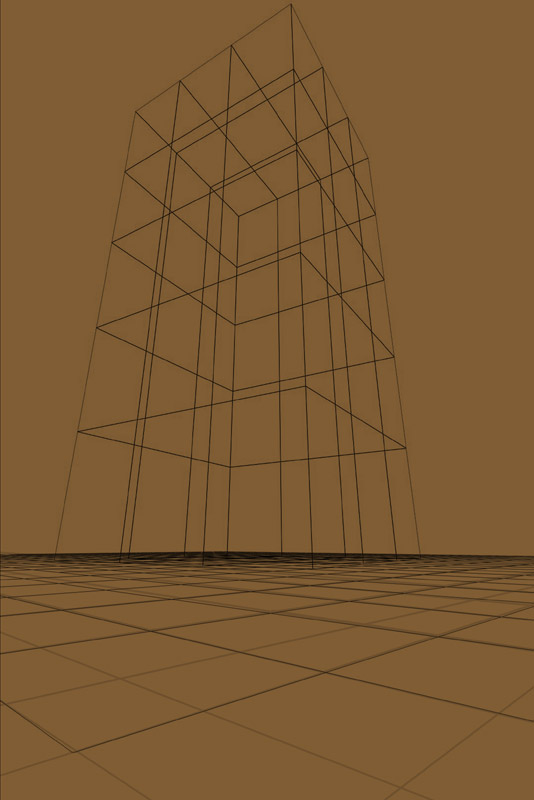 Because perspective drawing is so difficult, I will tend to cheat a bit and open 3Ds Max where I can get a basic wireframe rendered out. Here I just made a tall box to represent my monster.

It’s worth noting here that all the really top level designers know their perspective drawing and don’t create an image without employing it – whether kind of loosely in freehand/from memory or using very deliberate lines/calculations.

But before I rendered this out, I did the research to actually find out what kind of angle I wanted to look from. I chose a kind of low, human eye-level where the monster would tower above the viewer.

Creature Design Step 4: Getting the pose 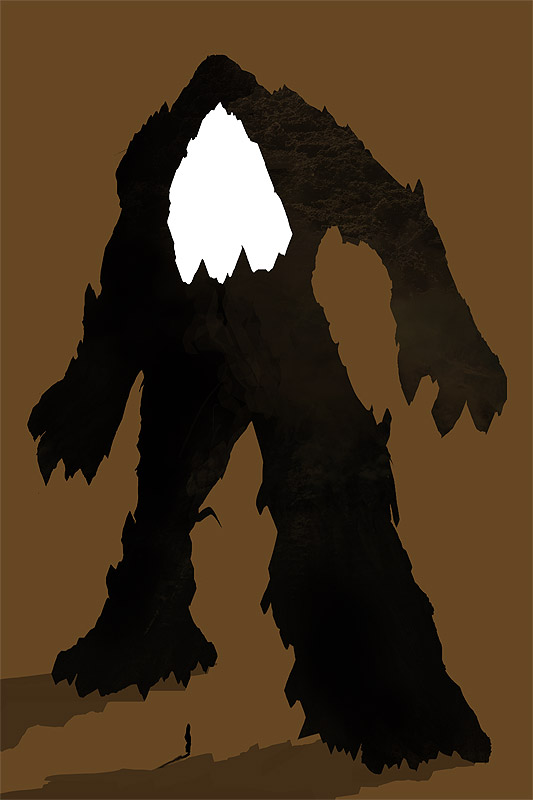 This pose was a kind of happy accident. At first I couldn’t get the perspective right but then it came together by just studying the grid. The left (our left) leg took several attempts to get right. But notice how much we’ve improved from the early sketches just by using a little perspective.

I also put in a little scribble of a person to give scale. 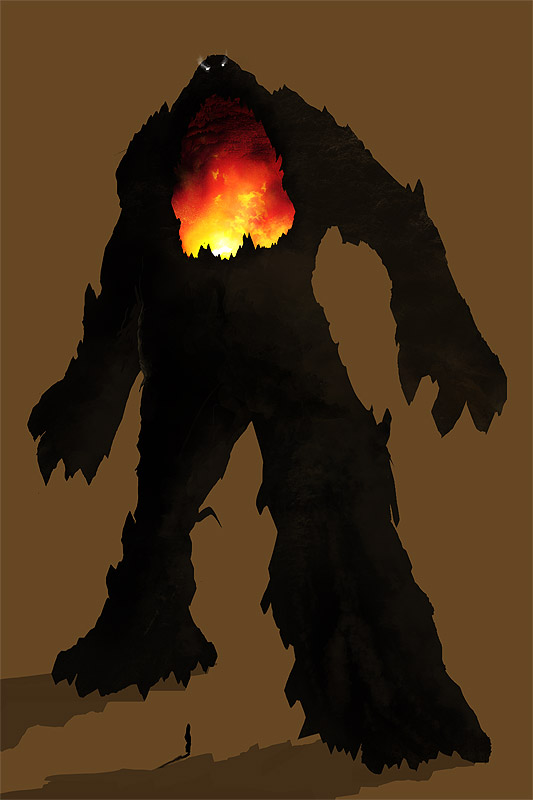 Here I’m just throwing down some basic shade, following the light based on the direction of the shadows. I also threw in some mouth detail here too. Just wanted to get a good feel for the character now as well as the pose.

I threw in a few very subtle textures here just to get a feel for where it was going. 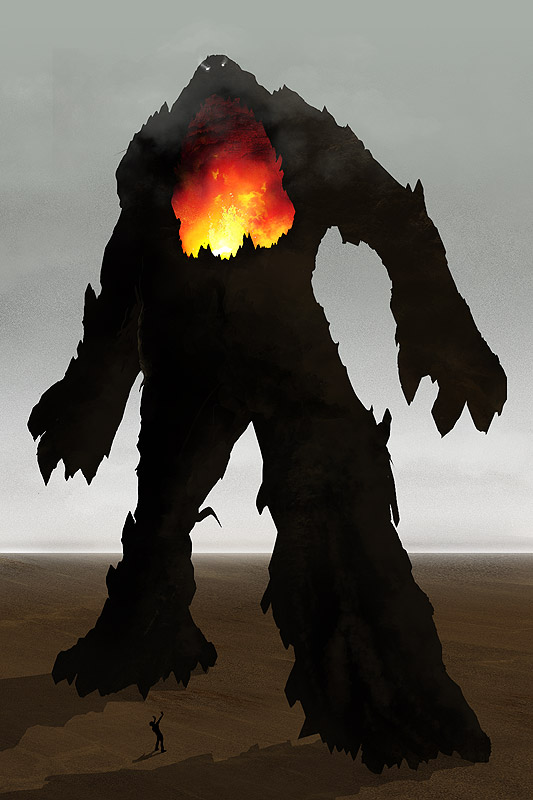 So here I just wanted to give him a world to live in. For some reason I like to get the outer, peripheral stuff done so I feel he can ‘live’ in the picture. Then I can feel ok about putting in the detail.

Again, some texturing was done here and then subdued quite a bit. Also put some low cloud around his head using one of my free cloud brushes.

Oh yes, and I made the little human more realistic too. This took a few attempts to get right actually. 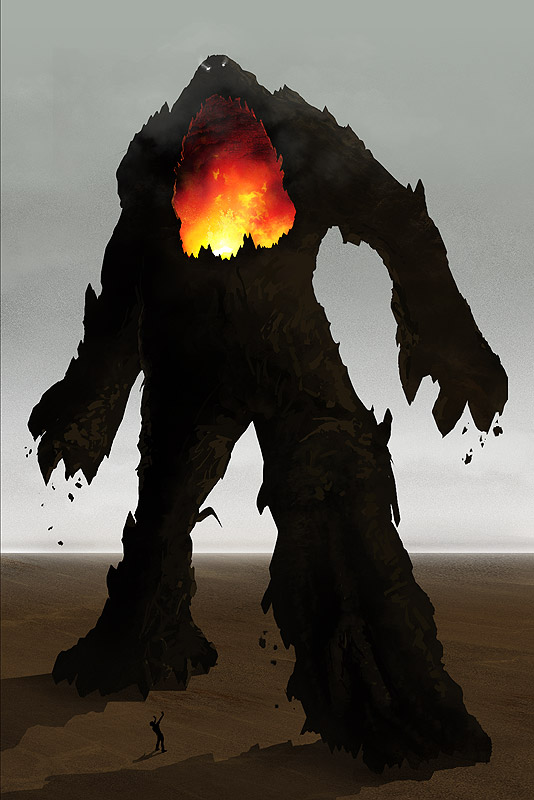 Here I am scribbling in the basic lighting using light browns.

I also lit the inside of his mouth/teeth and added some crumbling rocks because I wanted to give the feeling that wherever he walks, large chunks of rock fall off onto people below. 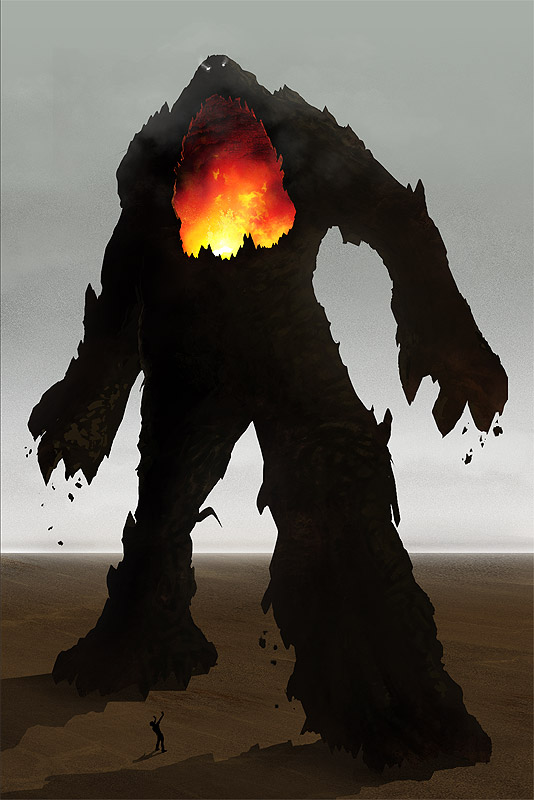 More of the same except I now go close into the painting and try to paint the actual rock texture. 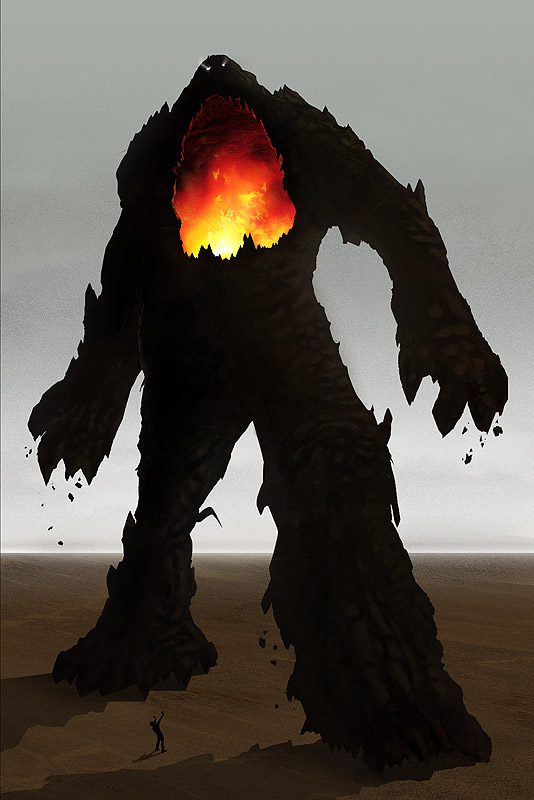 He was starting to look a little flat, so I brought up the highlights and brought down the shadows. This part is the most boring I would say and perhaps the most time-consuming! But you gotta soldier on.

Note: forgot to turn the ‘head cloud’ layer on here but I didn’t get rid of it. 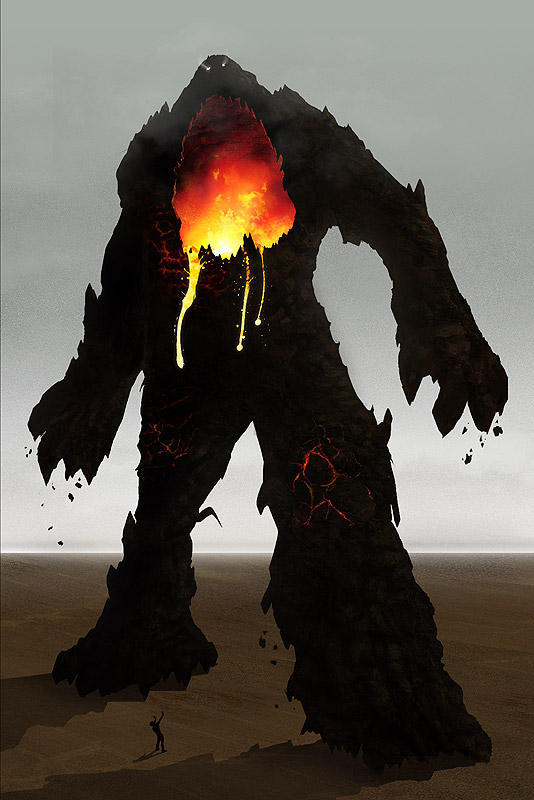 I was pleasantly surprised by the lava. The image itself was around 3000px high and even when viewed at about 50% the lava detail crunches down nicely. It was made using a default, chalky Photoshop brush at a very small size, painting in the reds, oranges, some yellows, then blended using the smudge tool.

I added smoke coming from his mouth and a few fallen rocks on the floor and I felt I was done. I was ready to submit it for the competition.

The preparatory work was about 10-15 hours (including some research into perspective drawing) and the painting took a day and a half or maybe two days (around 15 hours).

I’m pretty pleased with the result given the stage I’m at with digital painting. Maybe some day I could do this without as much prep and in half the painting time!

So I hope you enjoyed this tutorial. Please comment below and don’t forget the RSS feed link on the right so you can be notified whenever a new post is written here at Stay in Wonderland!