This digital painting tutorial is a little different from the others in that we’re using scenery generated by Vue as reference to paint a sci-fi UFO crash landscape. 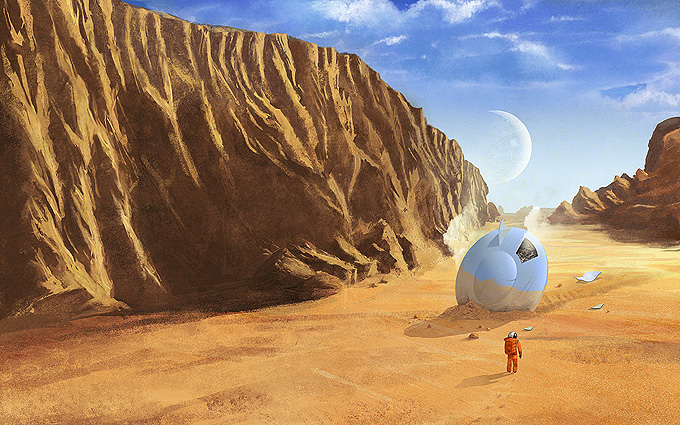 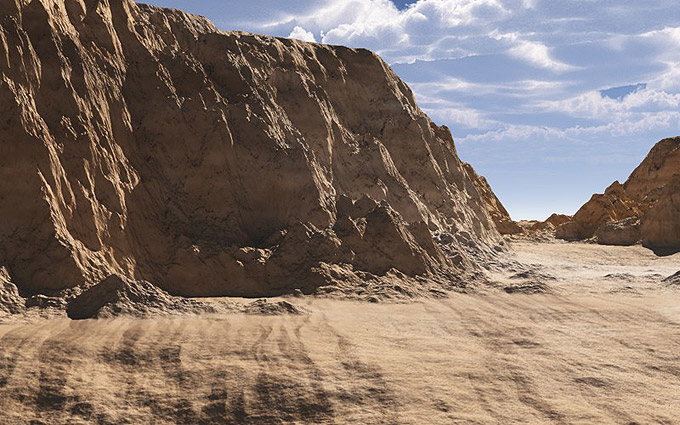 I decided early on that I wanted to create some nice, original scenery in Vue 7. I find that when searching for reference material in google, I can never find what I want. Also, by having this scene I could borrow colour values and even textures if I wanted them.

It’s pretty basic  with just one terrain, edited using the Canyon preset and I loaded a default atmosphere, fairly sunny where I moved the sun down a bit to give a late afternoon effect. The clouds were a few layers I tinkered with. 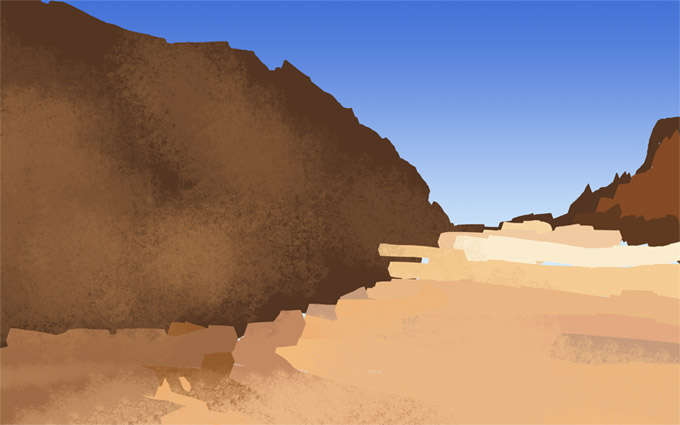 I had the scene on my left monitor and photoshop on my right. I also loaded the image in to colour pick from it. All very basic and ugly at this stage. File is about 4000 pixels wide.

Just used a solid diamond shaped brush and then some chalky texture over the top. 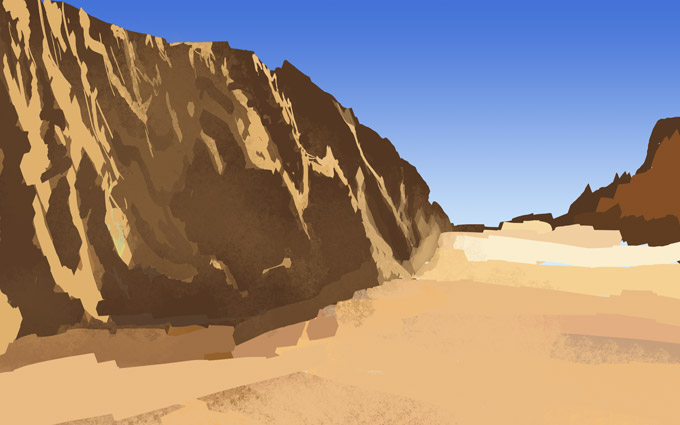 Here I’m just scribbling down where the light is hitting the rocks and taking darker values ‘behind’ the areas that are exposed to the light. It’s still messy at this stage and it can feel a little uncomfortable, wondering when it will start to come together. 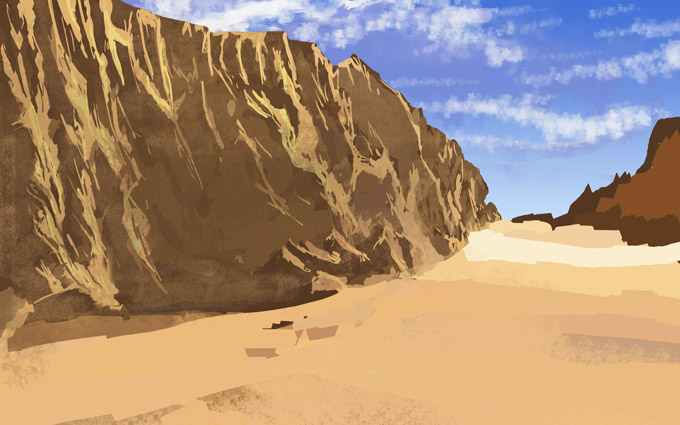 Scribbling more around the rocks now, adding light, adding shadow, rinse and repeat. Also added some texture here on the rocks to make them less clean. 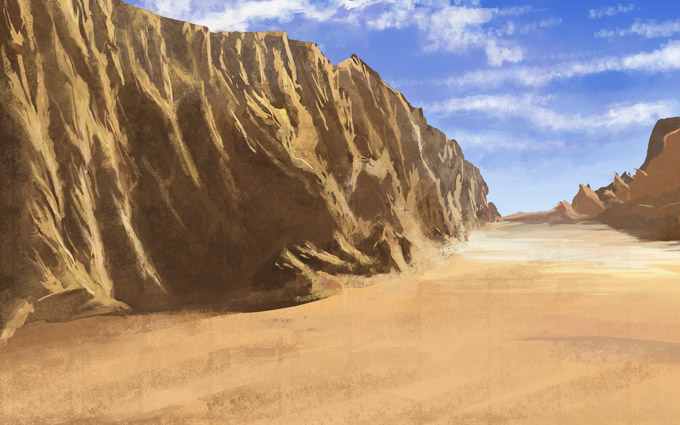 I found a great photoshop brush (it’s actually one of the default chalk ones but I tweaked it to look more chalky) and started to go further into the rocks again. Also tried to play with some clouds and smudged the ground colours on the horizontal plane.

Began some minor details on the right side too. It almost looks like a picture at this stage. Getting there.

Digital Painting Tutorial Step 5: As above but taken a bit further 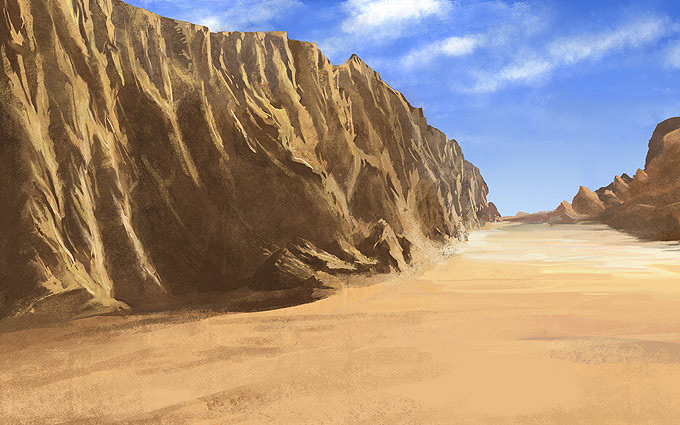 So working tighter all round. It’s only now that the scene starts to come to life. We can squint and see it working, the light feeling fairly consistent. Rocks are slowly gaining detail and looking half decent/believable. 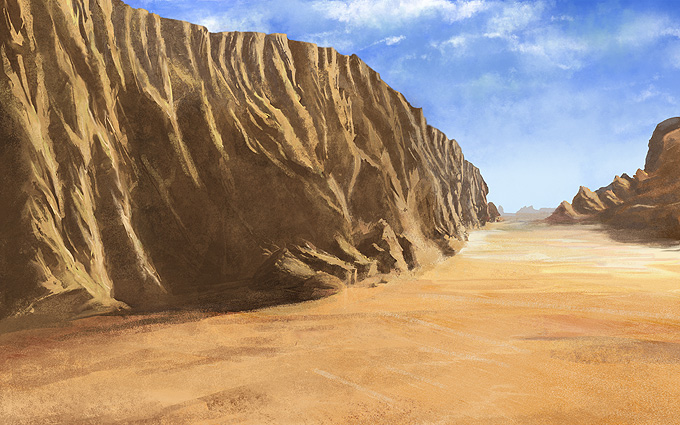 Pretty much done with the background/rocks for now. Mainly noticeable on the right. Sky is taken that bit further too and also I’ve added some concrete texture to the ground plane and skewed it so it works with the perspective of the ground. 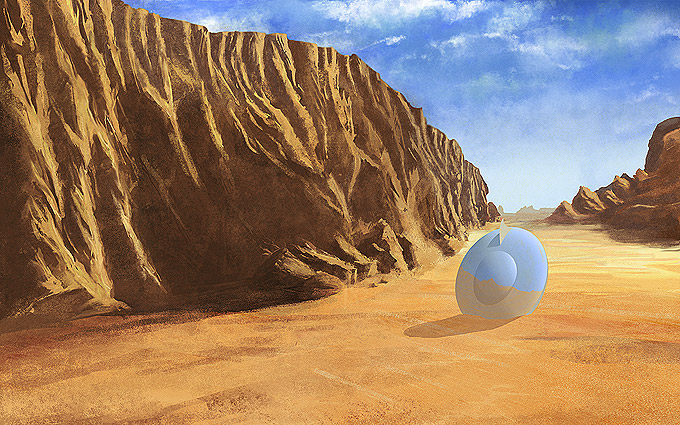 Ok, have to concentrate now. I wanted a crash scene but didn’t know what kind of ship I wanted. I threw in an ellipse and gave it a basic shadow and it seemed to work.

I then played around, gave it a dome and a fin and then placed a flattened image of the scene over it to make it appear reflective. After some manipulating of the reflection image I felt happy. It had a layer transfer mode of ‘colour’ or ‘color’ if we’re using adobe speak 🙂

I put the fin on to make it appear less alien, as though maybe it could be a man-made aircraft. I like to add mystery to the subject so nothing is clear cut in terms of a full explanation of the scene’s apparent story.

Also worth noting the composition. At first the craft was touching the horizon which messes with the eye as two significant lines intersect. So I brought it down. 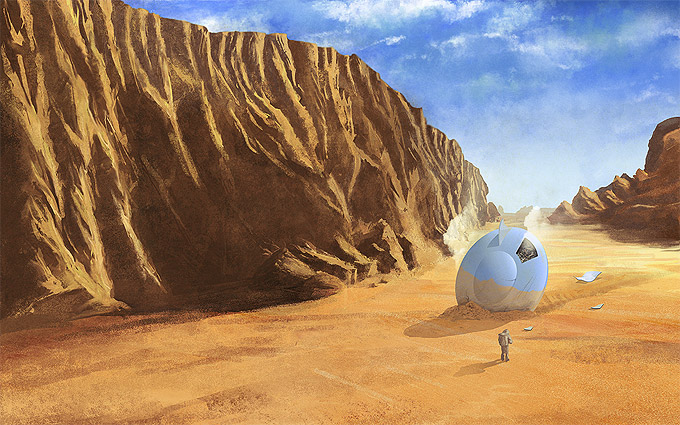 I threw in a guy for scale with the intention of making him pretty later.

Dirt was raised in front of the craft and a bit of soil texture placed over which I then sort of traced over and discarded the original as it was like a dark blob. Didn’t quite work. The trail was scribbled very quickly but immediately worked.

I cut a panel out of the craft and stuck in a basic photo of wires and such. Again, this makes the craft look a little old-school as real aliens would probably make their craft out of something more weird and sophisticated.

Smoke was just one click of a cloud brush. Well, two clicks of two cloud brushes. 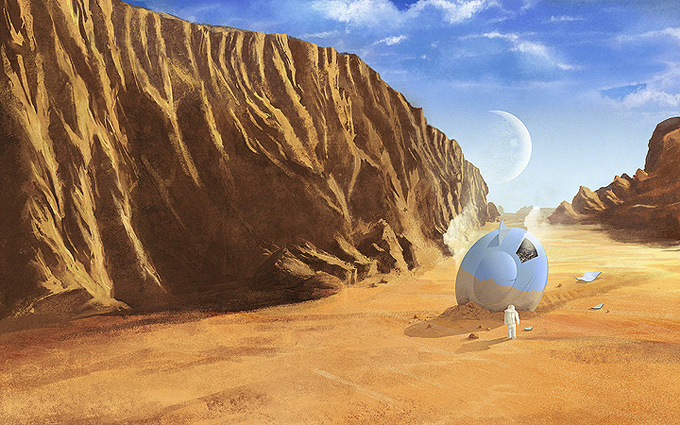 Just added some rock debris, finalised the sky and added a strange moon. Oh and reworked the astronaut.

I brought the Vue 7 sky back in and mixed it with my own photoshop cloud brushes. I don’t feel comfortable using an entire photo (or render in this case) as I want it to still feel painted.

But the astronaut was still giving me problems…

Digital Painting Tutorial Step 10: Finishing the astronaut and the painting for that matter! 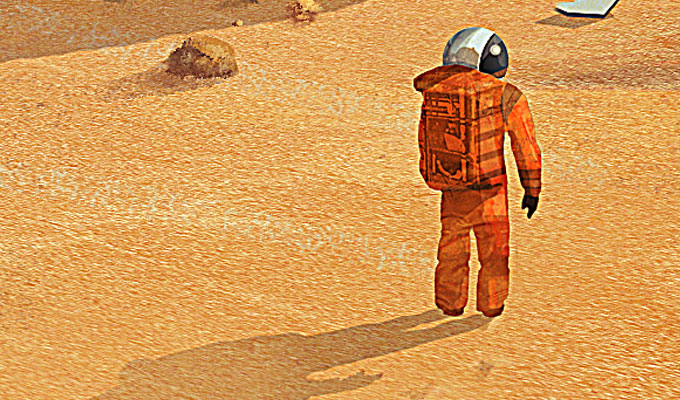 Here’s a close-up of our astronaut. Took a while to get him right. The body was just scribbled without reference, then I started to look at space suits and found some nice orange ones that NASA use. I actually got a photo of one – like a sleeve or something – and pasted it over the guy to add some cloth movement.

I then put in some detailed photo-brushes for his clothing/equipment detail. Same principle of reflectivity was used for his helmet. Most of him was just guess work though but I’m pleased with the result because you can view him here at 100% and not feel like he’s too patchy or that the detail only works when we crunch down the pixels.

And that’s it. I added a paper texture over the whole image to make it look a little worn and retro. Very subtle though.

You can purchase a print of this over at deviant art for a few dollars.

Ok, come back soon. If you appreciate the tutorial please comment below! Also why not subscribe to me using the RSS link.

Concept Artist in Seattle
View all posts by Andy Walsh →
This entry was posted in Digital Painting Tutorials. Bookmark the permalink.